VDL and DAF strengthen their collaboration through a mega contract

VDL Groep and DAF Trucks have announced today that they have consolidated and strengthened their long-standing relationship. The two technology companies, both headquartered in Eindhoven, the Netherlands, have entered into a new, long-term, versatile and significant contract involving hundreds of man years of work. The amounts have not been published. As part of this contract, VDL is going to update an assembly line to make it state of the art and supply components that will be integrated in the cabins of DAF trucks. Further collaboration concerning the fully electric truck, that has already been presented and was developed jointly, is also part of the new agreement.

Another aspect of the new contract is that VDL Steelweld in Breda, the Netherlands, is going to be responsible for modernising the assembly line in the DAF cabin factory in Westerlo, Belgium, in the next few years.

VDL Parree in Sevenum, the Netherlands, specialising in high-quality engineering plastic injection moulding, is going to supply parts for the interiors of DAF trucks. This will include plastic parts of the cabin. VDL TIM Hapert, which specialises in machining operations, is going to supply a multifunctional bracket for the DAF chassis.

Ever since VDL started in 1953, the company has worked together closely with DAF Trucks. Initially, the products and services supplied to DAF mainly consisted of pressed steel components, spot welding and regular welding. The portfolio was gradually expanded over time and VDL now produces various parts for DAF trucks, such as engine mounts, cable guides, battery housings, axle struts and exhaust pipe guides. DAF in its turn supplies 11- and 13-litre engines and axles for VDL buses and coaches.

“The e-truck that we developed jointly and that was presented in May last year crowned our 65-year collaboration,” said VDL Groep Chairman Willem van der Leegte. “DAF and VDL are both each other's customers and each other's suppliers. We both have strong and solid foundations and we both excel at innovations that make the future better, as shown in our e-truck which will make heavy transport more sustainable. This has led to a very strong and mutual commitment between DAF and VDL. This new agreement has laid an equally solid basis for our partnership, for both the present and for the future.”

Harry Wolters, President of DAF Trucks: “VDL and DAF are leading technology companies, both of which are driven by continuous improvement and renewal, and have a constant customer focus. This makes the collaboration between VDL and DAF unique and valuable.” 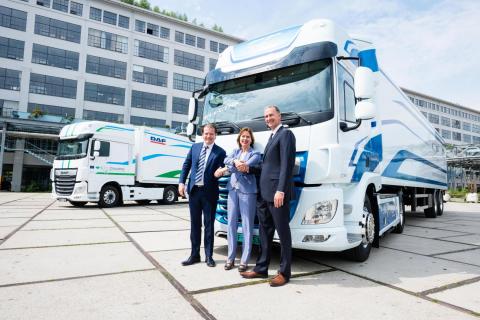 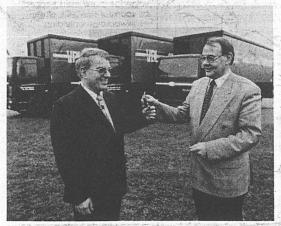 Photo caption (3 ): Wim van der Leegte (on the left) was given the keys to three new DAF-75s by the DAF dealer in Tilburg, the Netherlands, in 1993.